This is a personal illustration project I started in July of 2020, inspired by Netflix’s animated Castlevania series. Paying loose homage to the traditional Rider-Waite deck (first published in 1909), I am illustrating all 22 Major Arcana, each card reimagined with a particular character or element of the animated series in mind. Stylistically, I aim to capture the spirit of anime aesthetic in a way that blends seamlessly with the flat and often symbolic design sensibilities of art nouveau.

This project is neither endorsed by Konami nor Netflix in any way–I’m just having fun and challenging myself. 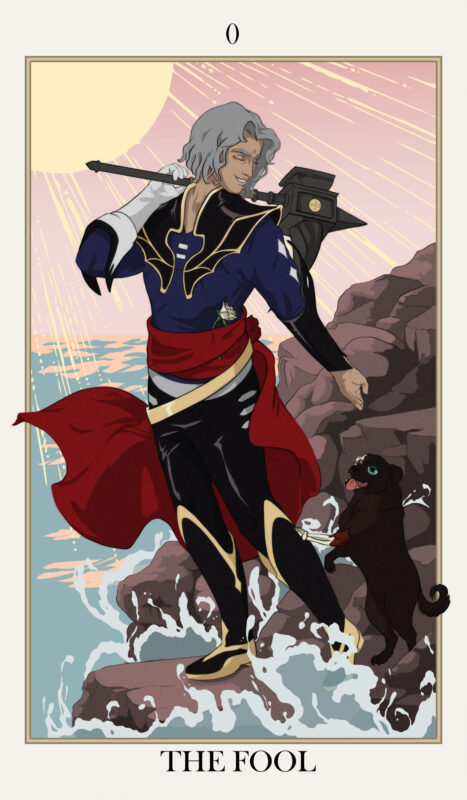 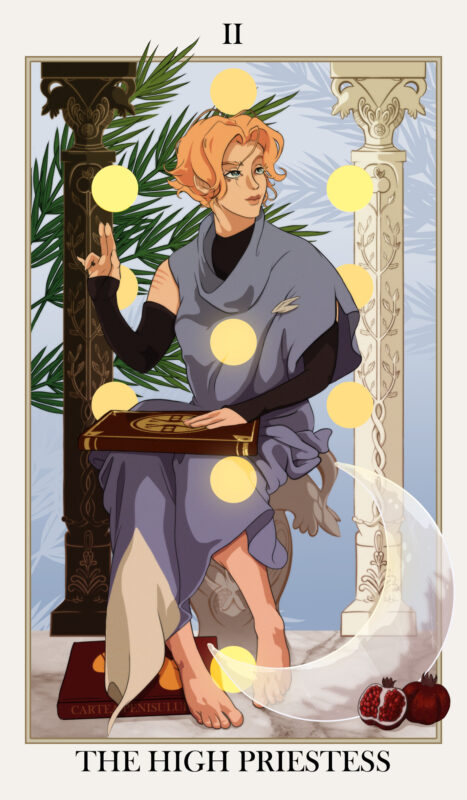 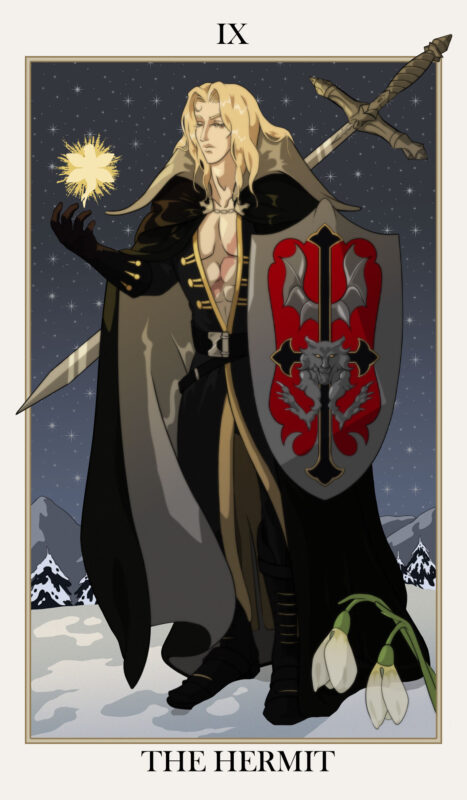 The Fool is a card of unlimited potential. Upright, The Fool represents innocence, hidden talent and taking a leap of faith; Reversed, it represents naivety, gullibility and poor judgment.
The first installment of my Castlevania-inspired tarot series! The Fool card features Hector, the quintessential “Fool” archetype, accompanied by his loyal companion, Cezar. Despite its deragatory implications, The Fool is generally a positive influence; he sees the world through a lens of childlike innocence and seizes new opportunities with little suspicion. Depicted carelessly walking over rocky terrain (inspired by the seaside cliffs of his own native Rhodes), The Fool enjoys the warmth of the sun shining through a rose-tinted sky, oblivious to the warning barks of his canine companion. He carries his material possessions over his shoulder with optimism (depicted in the form of his forging hammer–the burden of his innate talents), unaware that the weight of it threatens to tip him over into a treacherous sea.

I - THE MAGICIAN (SAINT GERMAIN)

The Magician links the material and spiritual realms. Upright, The Magician represents manifestation, resourcefulness and power; Reversed, it represents trickery, missed opportunity and wasted potential.
Ranked first in the tarot deck for his power to initiate action, The Magician serves as the link between the physical world and all which lies beyond–a role naturally suited for the time-traveling magician Saint Germain. Pointing upwards to the heavens while drawing power from the earth below, the Magician seeks to elevate himself to a higher state of consciousness. Upon the table before him, lay four elements each representing a suit of the Minor Arcana (each connected to a character from a major story arc): Wands for willpower (represented by one of Sypha's conjured ice shards), Cups for emotion (Trevor's beer stein), Swords for reason (Alucard's estoc) and Pentacles for body (forgemasters' coins). He is surrounded by a lush garden of roses, manifested by his own passion and ambition. The Magician dons a lemniscate above his head, symbolizing his immortality and unlimited potential, as the infinite corridor looms behind him.

The High Priestess thirsts for knowledge. Upright, The High Priestess represents intuition, occult knowledge and empowerment; Reversed, it represents confusion, hiding one’s true self from others and cognitive dissonance.
Our favorite speaker magician effortlessly fills the noble role of the High Priestess. Sitting in a sacred temple, The High Priestess is the guardian of knowledge and encourages the querent to trust their own intuitions to obtain the hidden answers they seek. Upon her lap, she holds a tome in an ancient occult language while cheekily obscuring her recreational reading for later–for the Priestess values knowledge in all forms.
In her divine wisdom, the High Priestess has found balance between polarizing extremities and surrounds herself with symbols of duality, for she knows that true transcendentalism requires one to accept both. She sits between pillars of black and white, representing both darkness and light. Behind her grow palms for masculinity, before her sit pomegranates for femininity. She has conjured a crescent moon of ice while enveloping herself with the warmth of fire arranged as the ten sephirot of Kabbalistic theory. She is depicted barefoot in this sacred space of her own making, as she has obtained the spiritual wisdom necessary to walk on this hallowed ground.

The Hermit faces the darkness alone, only his own inner light to guide him. Upright, The Hermit represents observation, introspection, and wisdom; Reversed, it represents loneliness, sadness and betrayal by loved ones.
The Hermit stands atop a mountain peak, lost in melancholy thoughts. Though he is sad and alone, the journey has not been in vain; he has already ascended the steepest slopes and with the pain and struggles behind him, he has found a higher purpose. Traditionally depicted with a lantern in hand, Alucard is guided by his own fairy familiar. His magical sword at the ready and shield in hand, it is unclear what his intention is: Is he barricading himself from pain? Or is he preparing to charge forward into the next great adventure? It is The Hermit's duty to look within and figure this out for himself.
In the foreground, two budding snowdrops peek out from the coldness, suggesting hope for new beginnings (a callback to a Romanian folk tale in which a young hero spills his own blood in the name of love, snowdrops spawning from the droplets of his sacrifice). Warmth is in the horizon.